tl;dr: A batch script (code provided) to assume an IAM role from an ec2 instance. Also provided is terraform code to build the IAM roles with proper linked permissions, which can be tricky.

I'm working through an interesting problem - syncing Azure DevOps to AWS, and making the connection functional, scalable, and simple. Sometimes, when designing anything, a path is followed that doesn't pan out. This is one of those paths, and I wanted to share some lessons learned and code that might help you if this path is a winner for you.

Our security model for EC2 requires that a machine assume a higher IAM policy when it is required, but the rest of the time it have much lower permissions. That's a common use case, and a best practice.

Some applications support assuming a higher IAM role natively - I later learned, after pursuing this, that terraform is one of those applications (more details on that in a future blog). However, some applications can't, and require you to do the heavy lifting yourself.

IAM - a Sordid (and Ongoing) History

IAM (Identity and Access Management) is complex beast that controls authentication (who are you?) and authorization (what are you allowed to do?). Because even simple complex can be made complex with enough work, IAM supports recursive role assumptions, so a resource that starts with 1 set of credentials can assume a different (or more expensive) set of credentials during certain actions.

This has the benefit of being very flexible, and the detriment of allowing deployments so complex it can require a serious amount of nancy drew-ing to sort out what permissions something "really" has.

This complexity has led to a series of high profile security vulnerabilities introduced by a lack of understanding or a too-complex deployment in some of what are generally thought to be the most security companies. The most recent high profile one was Capital One's hack by an ex-AWS employee. The ec2 IAM policies were written in such a way as to provide access to all s3 buckets, so once a single ec2 instance was compromised, all data everywhere was compromised. KrebsOnSecurity has a great write-up of the incident.

So clearly, lack of understanding here can be a vulnerability all in itself, so let's break down what pieces comprise IAM.

We'll build several IAM roles, with associated policies and trust relationships. First, let's build the Implicit IAM role. This role will be assigned directly to the ec2 instance, and is static.

Note that this role has an embedded IAM policy - this is our trust policy that permits the ec2 instance service to assume this role - this is required if any ec2 instance will be assigned the role.

Next we'll create an IAM policy for this implicit role. The only permission we want this policy to contain is the ability to use the STS service to assume a specific IAM role. Otherwise, this ec2 instance should act as a normal virtual machine, and not be able to edit or control the AWS environment around it.

Then we link the two together - remember that roles and policies are not linked by default, and have to be assigned together.

And remember this implicit IAM role needs to be statically assigned to an ec2 instance, and that requires it to have an instance profile, so let's build that and assign to the IAM role. 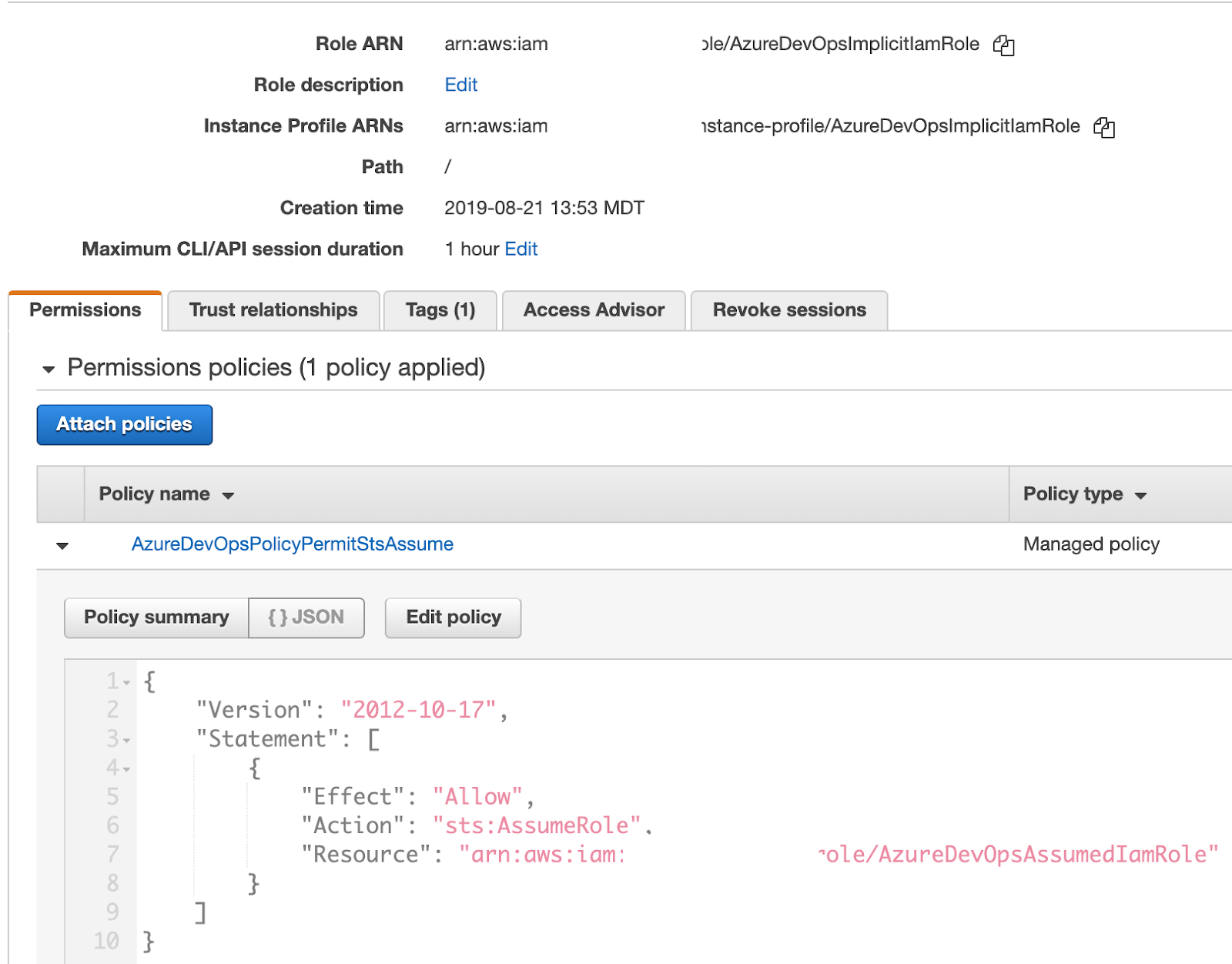 And here's the trust policy under the "trust relationships" tab. You should see the ec2 service is trusted by this policy to be assumed. 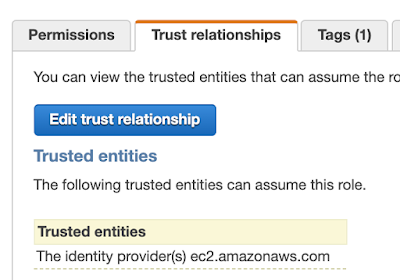 Now that we have an IAM role with a policy and a trust relationship to the ec2 service (and that gotcha of an instance profile), let's go assign it to an ec2 instance. I didn't include terraform code for this, so you'll build an ec2 instance by hand. Once ready, go into the instance settings, and click "Attach/Replace IAM Role".

Find the IAM role you want to associate with the ec2 instance (the implicit one we just built). If you don't see it, try the refresh icon next to the list, or go check to make sure the instance profile is built and associated with the IAM role properly.

More Permissions, Give Me More!

First let's build the IAM role. The role parts are exactly the same, but notice the embedded IAM policy (the trust relationship) is entirely different. Rather than trusting the ec2 service to assume it, it's trusting the first IAM policy only. This assures that only a single specific IAM role can assume this upper IAM role. And the lower role is assigned only to a single ec2 (or more if you want) instance, creating a limited chain of permissions that is very flexible to assign.

Now, let's build an IAM policy of permissions for this expansive role. The example here permits all actions to all services, which is NOT AT ALL a best practice. If at all possible make sure to limit your expansive IAM policies to much more specific actions to specific resources. The policy here should rarely be used.

And you can probably guess what comes next - we need to link the IAM role to the IAM policy that we just built, which looks like this:

When you look at the new role in the AWS console, it'll look like this: 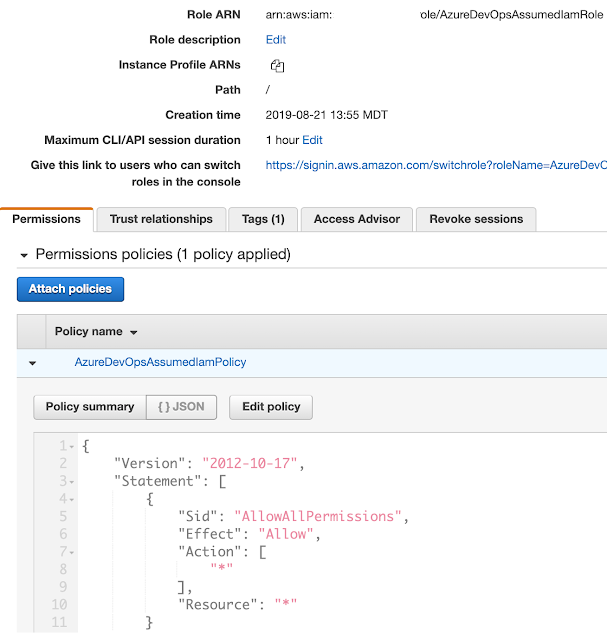 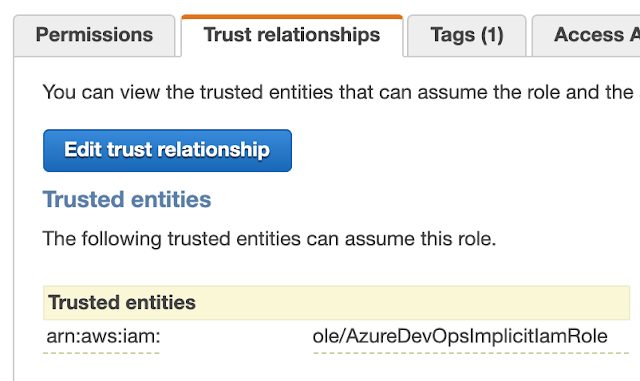 Now that everything is in place, we're ready to go onto the ec2 instance and assume the role. This involves running a batch script, which will do several things - clearing the variables in case of a last run hanging around, figuring out the account ID by calling the AWS ec2 metadata service, figuring out the instance ID, and setting the information to a text file where bash can call it and set the global env variables.

Then we start the cool stuff. AWS ec2 linux AMIs already contain the AWS CLI toolset. If you don't have it, install it for this to work.

First we use the AWS CLI to assume our role, depending on both the dynamic info we gathered earlier - the account number and the EC2 ID. These dynamic pieces permit this same script to be run in any account, and to set an IAM session name that is globally identifiable to this instance, for later CloudTrail-ing.

Then we use jq (javascript query) to export the pieces we need to a file, then we call bash to read the file and set variables into the bash shell environment. Then we cleanup by removing the STS creds from the disk.

Boom, your ec2 instance has now assumed a higher IAM role that the assigned one, and can do all sorts of stuff.

Wrap It All Up

The collected code for all these examples can be found here: https://github.com/KyMidd/AWS_EC2_IAM_Authentication

I'll continue to investigate how to use IAM roles in order to build a comprehensive terraform and Azure DevOps CI/CD, so these types of posts will continue. In the next one, I'll cover how Terraform can handle most of these items itself, so the bash script is not needed.

However, I hope this script and the coverage of IAM helps you in your non-Terraform requirements. Thanks all!

Good luck out there. kyler